One of the best vacations was to Northern Morocco. Although I loathe the degree to which foreigners count Moroccan design as separate from rather than a subset of African design (for an example just read the title of this article from Huffington Post Mahgreb), the appeal and distinctiveness of the former is undeniable. In Part I of my Northern Morocco tour, we explored Hotel Nord Pinus. Conveniently next door was La Tangerina, where we spent one night before leaving Tangiers for the Blue Pearl, also known as Chefchaouen.

After being reasonably spoiled by Nord Pinus, La Tangerina had a hard act to follow.  I was understandably disappointed when shown our second floor abode for the evening, room #3 which was indeed the smallest room on the property even though the hotel was not fully booked. One highlight in the room was the iron baroque bedframe. It was a beautiful metal patina, a lovely brass that disintegrated into a seaweed green color. But overall, the room was an exercise in austere beauty. A ulitarian space that reminds you instantly of Tangiers’ history as the getaway of 18th century writers keen to release their literary brilliance on to paper. I picture them writing feverishly, rotating a quill, body pressed against the small desk in the corner of our room.

The rest of the riad was a different story and featured many larger rooms, some complete with seating areas, others with architectural details including sunken floors and wall arches. The working fireplace in the parlor and decidedly French black and white marble floors more than made up for the relatively naked walls. Breakfast was by candlelight playing into to the romanticist ambiance that hung around the hotel.

La Tangerina was a very short stay. By mid-morning the day after our arrival we were off to wonderful adventures in Chefchaouen but I did not leave empty handed. I gather a few marketing and interior design tips from La Tangerina below.

Tip 1: Hotel owners, always give the press your best accommodations wherever possible. Good press can do wonders for small boutique hotels especially if the journalist is opening a new potential demographic for your business. If you agree to give them free or discounted accommodation, do not do so begrudgingly – put the property’s best foot forward.

Tip 2: Distract from small room sizes with expressive bedframes.  The bed in Room 3 was one of the charming subtle details of the décor. You can achieve this effect by painting the desired part of the frame and then softly using sand paper to make it look aged once the paint dries. Another guest room featured an upholstered headboard with matching duvet.

Tip 3: Think about how the space looks from a bird’s eye view. A tenet of riad architecture is the internal courtyard and interior terrace. The views looking down from the stairwell of La Tangerina are some of the most magnificent.

Overall it was a good stay and we were well rested for our subsequent adventures….Where will I be in Part III? Stay tuned!

We woke up on Day #2 in #tangiers at @hotel_la_tangerina. Brooding, romantic and decorated with old world minimalism, it is the sort of place you can envision a tortured but brilliant writer pouring out a masterpiece in front of the foyer fireplace… #maroc #travelogue #breakfast #girltrip #kasbah #medina #welltravelled #passionpassport #lifestyleblog #rustic #friends #riad #seetheworld

Enam Gbewonyo’s Lessons for Surviving the Intersection of Black, Diaspora, Gender and Art 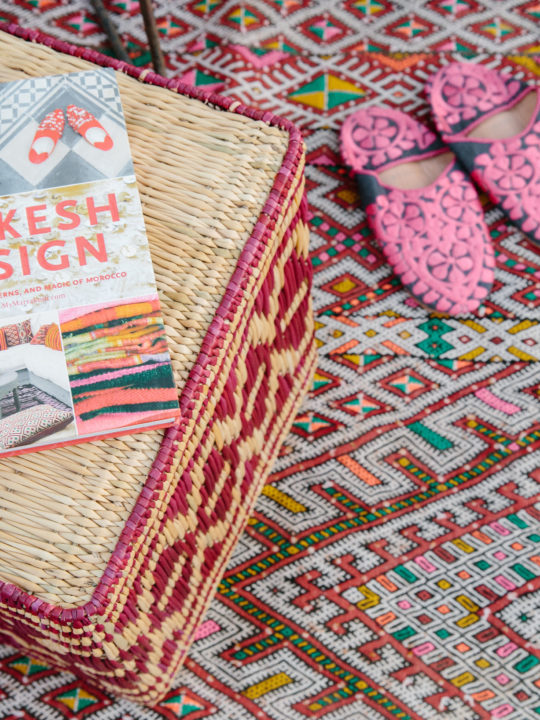