Office Spaces in Africa Are Stealing The Spotlight From Google

Increased activity in Africa by multinational organizations has generated a significant demand for high quality office space in many capital cities. Likewise the lack of formal employment opportunities for Africa’s youth has generated a need to provide supportive infrastructure to accommodate emerging entrepreneurs who can barely afford to move out of their parents’ home.  These two phenomenon are directly impacting the future of Africa’s work spaces. Move over Google, a few places in Africa might have cooler offices.

One of the biggest and most pre-eminent employers on the African continent are multilateral development banks (MDBs), and they are sprouting offices in various cities. The African Development Bank (AfDB) for example launched a hub-spoke model for its field offices some years ago. Under its new Business Development & Delivery Model, it is putting more foot soldiers on the ground which means there will be more calls for built design services. The bank is planning to build a new office building in Abuja, Nigeria for instance.

The AfDB’s revamped decentralization comes on the heels of the nearly 5-yearlong renovation to their 50,000 m2 headquarters in Abidjan, Cote d’Ivoire. The bank completely gutted the interiors, removing a layer of asbestos and switched to open space to accommodate a staff complement that tripled in size since the building was abandoned at the height of the Cote d’Ivoire crisis a decade earlier. Managers no longer have the confines of private offices – a new approach for the largely hierarchical institution. Although the Staff Council of the AfDB approached open space with trepidation citing the usual noise, smell, and health concerns, since the staff moved into the new building earlier this year, they have adapted to the new reality. Despite some design flaws (the building’s windows are welded shut requiring a continual dependence on air conditioning), staff are increasingly welcoming the new design which features spectacular views from the curved façade of the building’s two towers, the integration of a cafeteria in the basement, kitchenettes on every floor as well as several lounge areas for spontaneous meetings on the 13th floor of the skyscraper. AfDB’s creation of a new department for Urban Planning and Development also bodes well for the future of corporate design for some of its clients.

AfDB is not the only development bank taking corporate design to the next level. Starchitect David Adjaye will build the World Bank’s new headquarters building in Senegal. Their existing Ghanaian offices were designed by Co-Arc Architects, a South African design firm.  Designed around a tree in the courtyard, the Ghana office is green and said to keep “with local traditions” with the office block raised on stilts on one side, reminiscent of the colonial bungalows that are now being torn down by developers to build condos. The main entrance foyer is said to be “styled on the tumi te se kosua, an Adinkra symbol showing an egg held delicately,” purported to insinuate the fragile nature of political power, democracy and the country’s potential. Indeed, MDBs are not only using design as an example of the future of the African workplace but also as a reinforcement of African aesthetics and their own corporate values.

No matter what MDBs do to develop Africa, it will never be enough. The future rides on the backs of African entrepreneurs. Africa has an estimated population of 1.2 billion, of which 41% are below 15 years in age. Young people lack formal employment opportunities and are relegated to becoming ‘bootstrap businessmen’. Ironically, nobody really cared about where these entrepreneurs were supposed to manufacture their rags to riches story. Office space averaging around $25 per meter square per month according to Frank Knight’s 2015 Africa Report can put a hard stop on any young African company’s growth.

Foreshadowing the infrastructure needs of young business, Africa has exploded with co-sharing offices, offering their members incubation services in the form of professional conference rooms, fast internet and bottomless coffees. They are also imbibing a generation of people on the potency of good office design. Nairobi alone boasts of at least 7 co-sharing offices. Pawa254 for example, founded by celebrated photographer Boniface Mwangi, seeks to create a space specifically for creatives (rather than techies). In homage to that, the space features a rotating mural of influential and inspirational people and quotes, a funky rooftop lounge space, and a game room to recharge one’s creative juices. Many other such virtual office spaces exist across the continent: Impact Hub Ghana, OPEN South Africa and SunDesk in Morocco (which also offers room and board).

Raising the design bar for other incubators is new kid on the block, Ventures Park. Co-founded by Ernest Danjuma Carter, Kola Aina and architect Wole Olabanji, the campus in Abuja, Nigeria fulfills its purpose as a center for innovative thinking. “First of all we wanted the space to be spacious, bright and airy because I believe nothing stifles creativity faster than a stuffy environment. I think traditional office spaces in Nigeria have too many walls which stifles collaboration. We need less private offices and more co-working spaces,” says Ernest of the concept.

A pillar of Venture Park’s successful design was flexibility during the process. Ernest recalls, “Every time we had yet another design change, I was apprehensive, but Wale [architect] always received the news like a champ and was willing to give any idea – however crazy – a fair listen and try it before saying something was impossible.” The trial and error approach yielded a sustainable design full of distinctly African panache – all realized within only six weeks.

The shipping container design was borne out of necessity. “When we got the site there were some permanent structures but not nearly enough for what we envisioned. So instead of putting up more permanent structures we came up with affordable, sustainable ways to expand the space. The containers were an obvious choice.”

A fan of Scandinavian minimalist furniture that seamlessly combines aesthetics with functionality, Ernest recalls that shopping for the interiors was tricky. “Because we had a condensed timeline, we sourced everything locally. We designed and manufactured most of the furniture and then purchased the rest from Abuja and Lagos based furniture stores.” 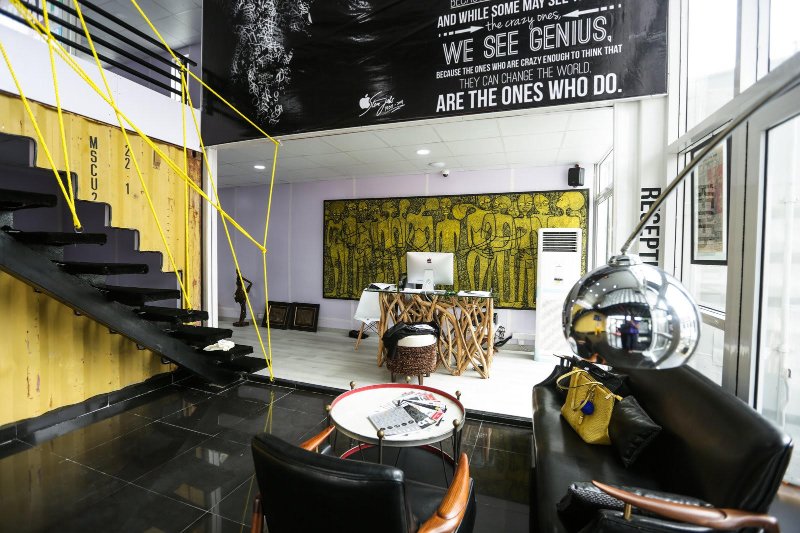 When asked what tech-based solution he hopes walks through the door Ernest laughs and says: “The next Facebook! But no, I’m hoping we get to build the first originally Nigerian, originally African idea. I feel like most of our solutions, however innovative are ideas made popular elsewhere. We bring them here, re-purpose them for the local market and then roll them out. I would like to see original solutions in sectors like public policy that make it damn near impossible for government officials to enrich themselves with taxpayer money. I feel like that would create a change.”

When it comes to creative industry linked start-ups, Ernest is extremely positive. “Gone are the days when you have to deal with unreliable homeware vendors for example. Online companies like Konga are breeding a young class of tradesmen to function with efficiency and consistently produce the kind of quality you’d expect anywhere else in the world.”

Increasingly, both large multinationals and small-scale sole proprietors in Africa are taking note of the importance of ambiance in a workplace. Office design is primordial to business productivity and not just a luxury. The question becomes what new solutions can design offer to fill the gap in available and affordable office space in Africa: commercial-residential single family home combos? Direct entry or corridors between apartment buildings and office buildings? Work spaces by specialization, i.e. shared kilns for ceramicists, shared industrial kitchens for caterers and bakers? Perhaps one of these innovative work spaces will birth the next big interior design idea? Let’s certainly hope so!

Do you work in a country in Africa? What would make your office space more functional and fun? 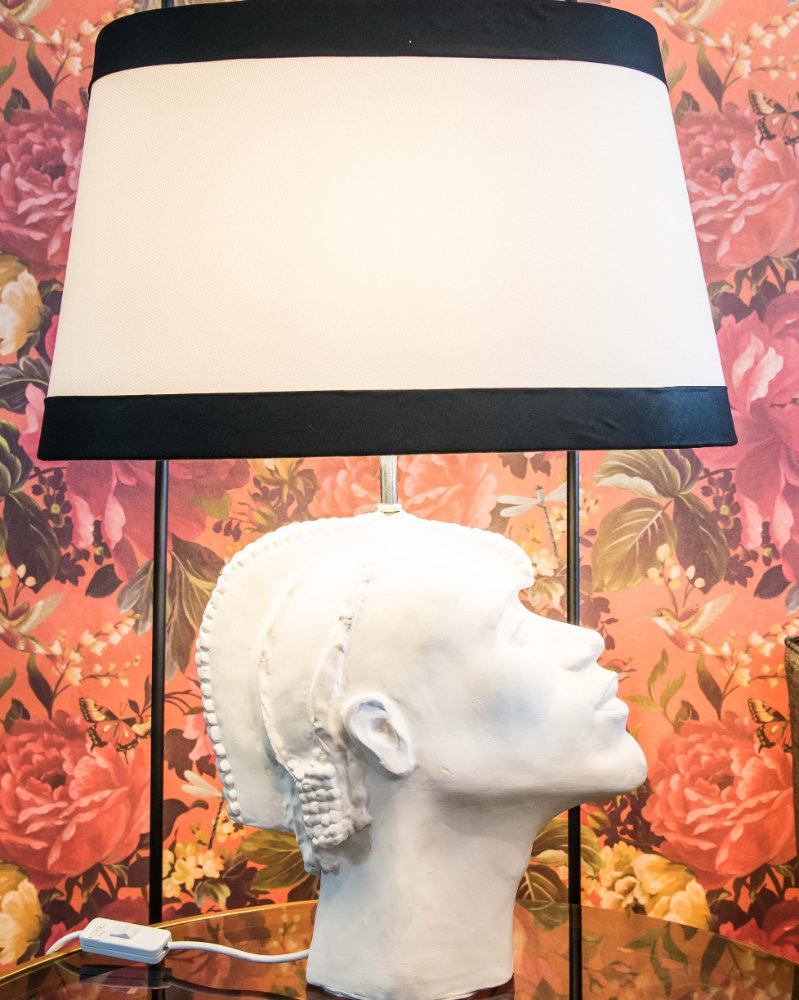 The Easiest Way to Grow Your Instagram Following…For Free